Take a guided tour with a difference this month. Our Outlander tour is a must if you’re hooked on the new series. See Doune and Blackness Castle in Scotland and Glasgow Cathedral. Or what about an Urban art tour? Discover the thriving street art scene in London.

And last but not least it’s St Patrick’s Day. We take a trip to the ancient City of Armagh in Northern Ireland where there are two historical Cathedrals, both called Saint Patrick’s.

1   Take an Outlander tour of Scotland

Last month the Scottish time-travelling series Outlander returned to our screens. Filmed entirely in Scotland – including scenes set in North Carolina – Outlander has boosted Scottish tourism, driving visitor numbers up by 67% over the last six years. Doune Castle near Dunblane – which features in the drama as the clan powerbase Castle Leoch – has seen visitor numbers double, with similar increases at Blackness Castle, where ‘Black Jack’ Randall’s headquarters is filmed, and Glasgow Cathedral, which stood in for a French hospital.

See these wonderful places on our Outlander tour and our tour of Glasgow. You can also read more about our top 10 Scottish Castles which include Doune and Blackness Castle. 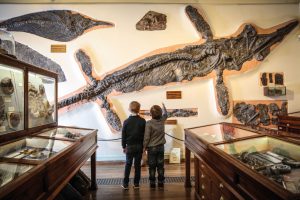 On 9 March 1847 the fossil hunter Mary Anning died at her home town of Lyme Regis. Born in 1799, she had no education but taught herself to read and write and went on to become an expert fossil hunter. Anning spent hours cleaning fossils with nails and documenting her finds. She knew more about geology than many of the wealthy fossilists who traded with her, but it was always the gentlemen geologists who took the credit.  Blue Badge Guide Richard Madding tells us her and about his tour of the UK’s Jurassic Coast.

If you want to see some fossils, – then head to the Lyme Regis Museum which charms with its eccentric building as much as its Mary Anning fossils. Then there’s the Whitby Museum, which moved to a new building in 1931, designed around its prize example of an ichthyosaurus crassimanus found in the local jet beds.

We take a look at these museums and others as we tour the best museums in the country. 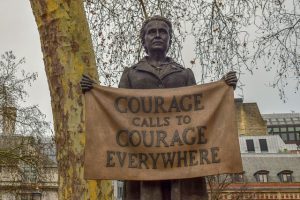 Statue of Millicent Fawcett in London

For International Women’s Day, we celebrate the suffragette Millicent Fawcett whose statue now stands in London’s Parliament Square. Unveiled in 2018 it was not only was it the first monument to celebrate a woman, but also the first statue in the square of a woman.

Our Blue Badge Guide Mary Carroll runs a suffragette tour in London. She tells the story of how women won the vote, the tactics they used and the personalities involved. “As a history guide, I was keen to tell the story of women’s struggle for emancipation. I wanted to bring the campaigners to life so I teamed up with two other Blue Badge Guides to develop an ‘interactive walk’ combining guiding with scenes and characters – a cross between street theatre and history.” Read all about her suffragette tour. 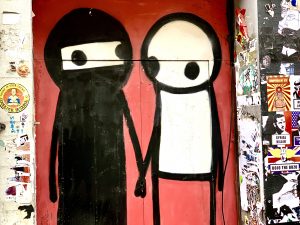 Local authorities don’t quite know what to do about street art. Should they prosecute those committing ‘graffiti’ – or protect street art behind perspex?

If you want to see a different side of London then take one of our urban street art tours. They provide an edgy alternative to the more traditional offerings. Achingly-cool Shoreditch is famous for its street art as well as its hipsters. Over the river, in Lambeth, are the Leake Street Tunnels under Waterloo Station. Street art here, far from being forbidden, is positively encouraged. 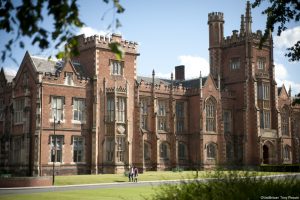 If you’re taking a trip to Northern Ireland this month then visit the ancient City of Armagh and celebrate Saint Patrick’s Day. You’ll find two historical Cathedrals, both called Saint Patrick’s. This is the very place Patrick ordained in the 5th century as the “centre for his church in Ireland”.  Local Blue Badge Guide Barbara Ferguson shares the history, culture, folklore and ‘must-see’ things to do on a tour of Northern Ireland.

If you want the crowds and party atmosphere then head to Belfast for the Saint Patrick’s Day carnival and parade. The city centre will be full of people, music and colour – with dancers, floats, performers and musicians. Take a private guided tour of this historical and fascinating city with a local Blue Badge Guide.