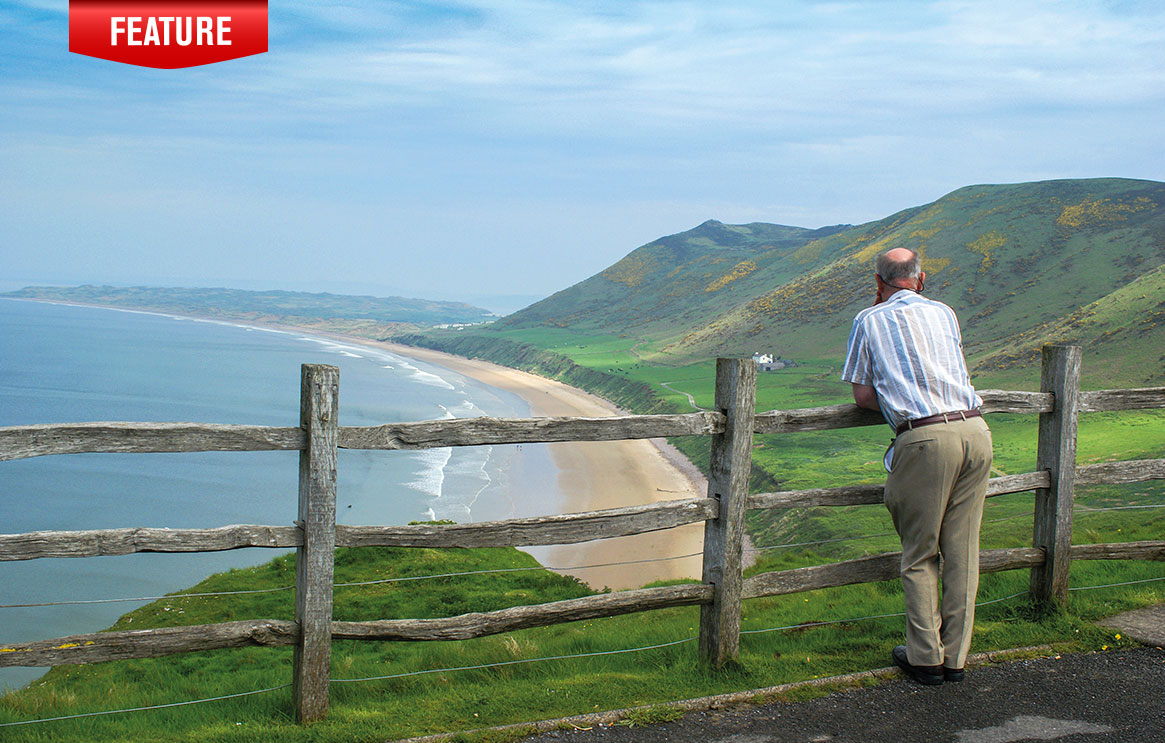 Wales’s unofficial national poet: Dylan Thomas is often remembered for his boozy bohemian behaviour in London and New York. His greatest poetry was written in suburban Swansea and an isolated boathouse.

Dylan called Swansea his ‘ugly, lovely, town’ – an industrial revolution city dusty with coal mines and fogged by metal smelters. He grew up at 5 Cwmdonkin Drive; a polite Edwardian house which clings on to the side of a hill at such a madcap angle it should long ago have slipped into the bay.

Baby Thomas’s view of the world was framed by the criss-cross glass panes which look down from the first-floor front bedroom onto Cwmdonkin Park. Little Dylan spent his childhood adventuring here. His schoolmaster father urged his son to go to university, but Thomas junior soon discovered the nearby Uplands Tavern where a lifelong love affair with beer began.

The Thomas pub trail leads to the port. In Dylan’s day the haunt of sailor’s molls, it is now a shiny dockside marina. If Swansea turned a blind eye to its wayward son when he was alive, they’re making up for it now: outside the Dylan Thomas Theatre, in Dylan Thomas Square, is a squat, gun-metal statue of the poet. Visitors rub his foot for good luck, and pay homage by offering him a sip of beer.

What the little Welsh fishing village of New Quay made of Thomas and his London girlfriend Caitlin when they moved here in 1944 is hard to imagine. Even today New Quay is a glorious old fashioned bucket-and-spade town of ice-cream cones, slot machines, and whitewashed Gwely y Brecwast (bed and breakfast) houses.

The town’s single main street snakes past the Black Lion Hotel. Inevitably this tavern is New Quay’s monument to Dylan. Thomas called it his ‘pink washed pub waiting for Saturday night as an over-jolly girl waits for sailors’. Inside, on the wooden beams, is a quote from ‘Under Milk Wood’: ‘Time passes. Listen. Time Passes’. In sleepy New Quay it passes very slowly. 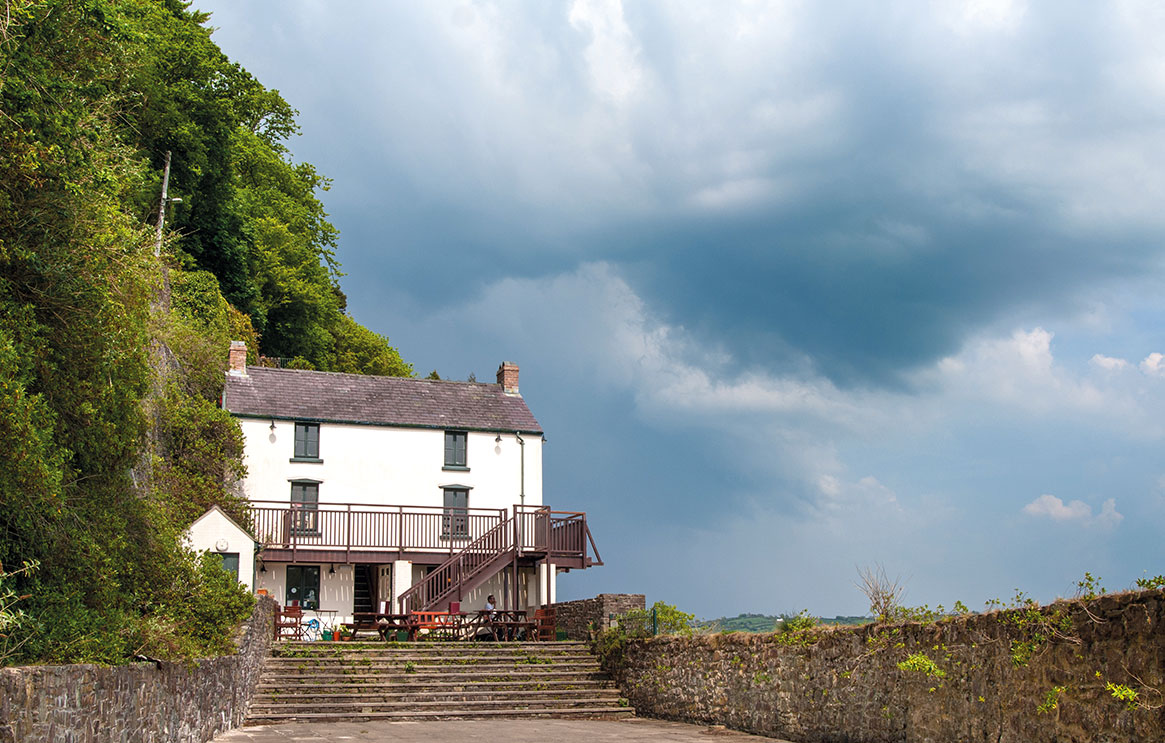 The Boathouse where Thomas wrote much of his poetry

If there is one place which captures the soul of Dylan it is ‘the timeless, beautiful, barmy (both spellings)’ sea village of Laugharne. Thomas remarked that he got off the bus here, and forgot to get back on. It’s not difficult to see why: a writer could not wish for a more romantic setting, with the ragged remains of a castle standing watch over the green marshes and ‘heron-priested shore’ of the Taff estuary. 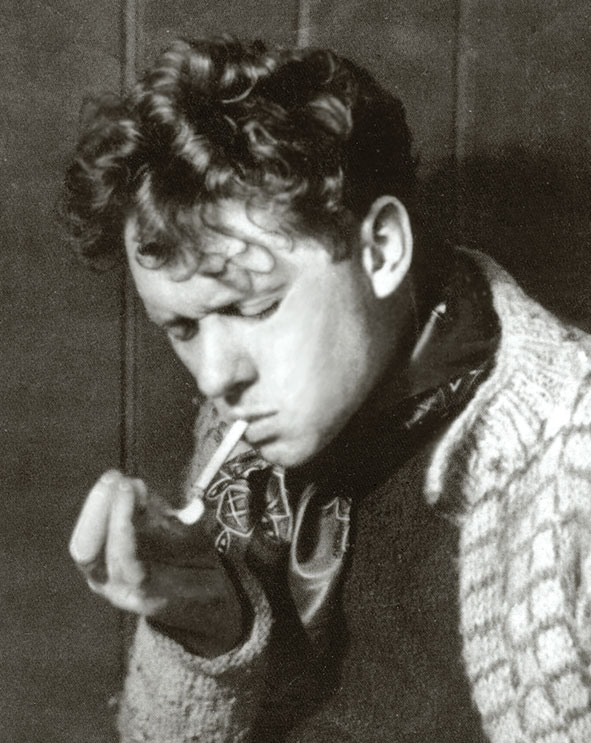 Thomas loved his Laugharne boathouse home, calling it a ‘sea shaken house on a breakneck of rocks’. As I scaled the steep cliffside steps to visit, a local woman (who could have stepped from the pages of the Laugharne inspired ‘Under Milk Wood’ ) told me it’s a miracle ‘the bugger ever got up ‘ere, being drunk all the time’. The inside is furnished as it was in Dylan’s time; a house-proud kitchen and a modestly neat lounge. 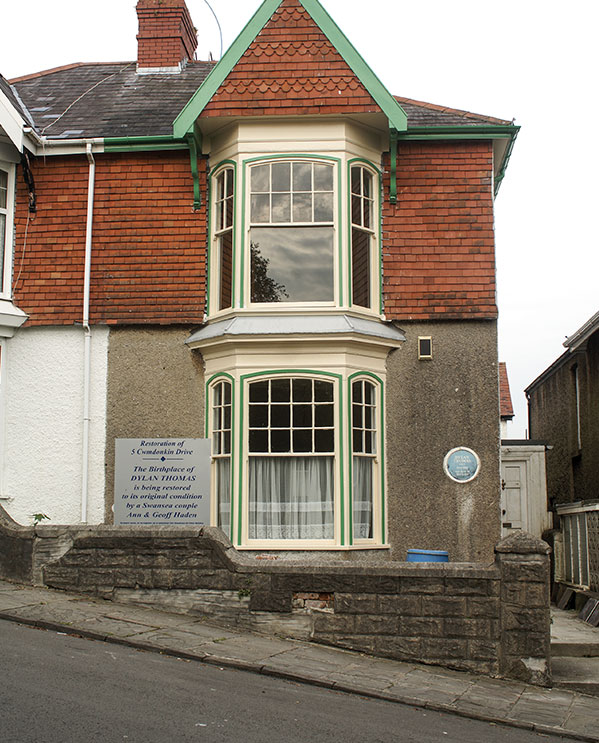 5 Cwmdonkin Drive, where Thomas was born

Dylan lived here from 1949 until he boozed himself to oblivion during a visit to New York in 1953. His body was brought back for burial in Laugharne’s Welsh gothic Saint Martin’s Church. A simple white cross stands at the centre of the graveyard. Pilgrims bring tributes, from a white plastic toy horse to an appropriately empty whisky bottle. Dylan is still here in spirit. Why would he ever take the bus out of Laugharne?

Oxford is a city born of studious seriousness, but its dreaming spires have ignited the imagination of some of the world’s greatest fantasy writers – the most celebrated being ‘The Inklings’.

This informal literary club met every week from the early 1930s at The Eagle and Child. The pub – which they nicknamed ‘The Bird and Baby’ – is a relaxed, wood-panelled tavern which traces its history back to 1650. It takes its name from the legend of a noble-born baby found in an eagle’s nest – a fantastical story that would sit perfectly in the pages of The Inklings most famous fellow: JRR Tolkien.

Tolkien arrived at Exeter College in 1911 to study English literature. A Finnish grammar book in the college library spurred his passion for inventing languages, in particular, Quena, spoken by the Elves in The Lord of the Rings. The well-thumbed grammar is still in Exeter’s library, complete with the ticket showing when the young writer borrowed it.

Commissioned into the Fusiliers during the First World War, Tolkien served on the Western Front. “By 1918 all but one of my close friends were dead,” he said. 23 of his 56 classmates were killed in action, a trauma he summoned up in ‘The Lord of the Rings’ – when the heroes cross the ‘dead marshes’, pools filled with floating bodies. 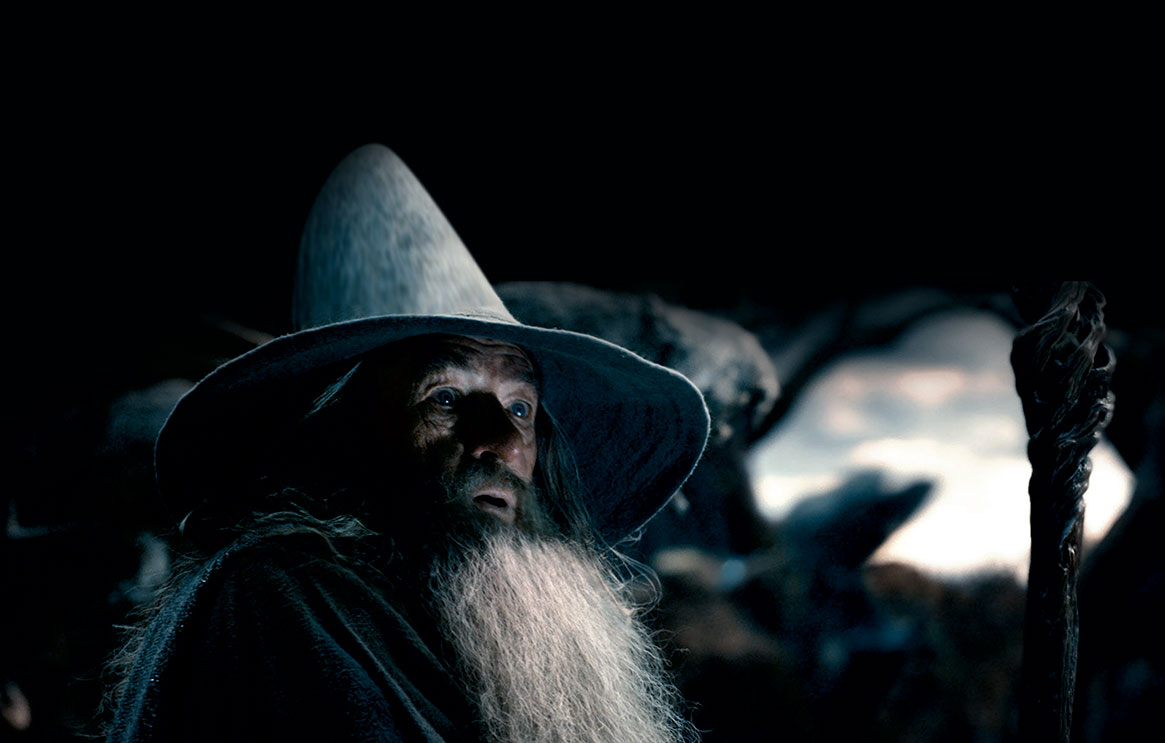 Ian McKellen as Gandalf in Lord of the Rings

He returned to his alma mater to work on the Oxford English Dictionary. Tucked away in the university’s Bodleian Library, he was tasked with researching Germanic words beginning with the letter W. Open volume 19 of the great dictionary and you will find his definitions of waggle and walrus.

In 1925 Tolkien became Professor of Anglo-Saxon at Pembroke College. At the same time he was writing the books that enthralled thousands of teenage fans. ‘The Hobbit’ first came to life at his family house – 20 Northmoor Road. One summer he was given an enormous pile of exam papers to mark at home: “It was very laborious and, unfortunately, boring,” he recalled. “I remember picking up a paper and one page was left blank. Glorious! Nothing to read. So I scribbled on it, I can’t think why, ‘In a hole in the ground there lived a hobbit’.” 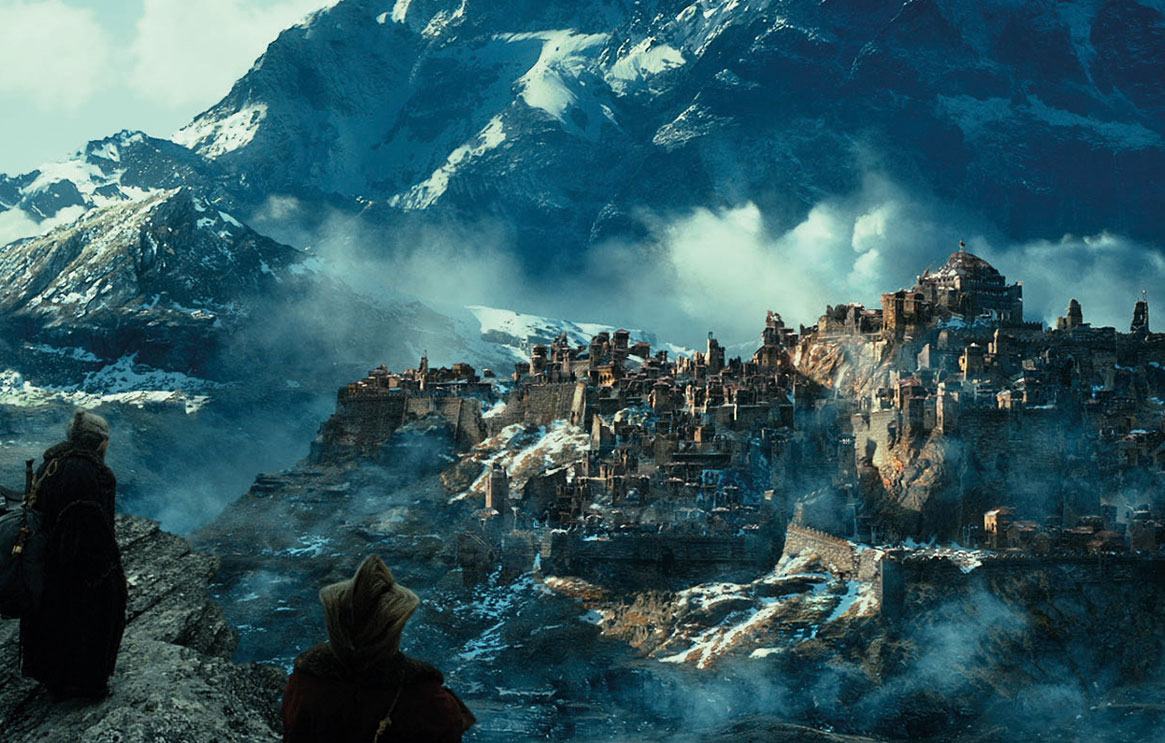 Lord of the Rings

He was fascinated by the origin of place names. Tolkien overheard locals pronounce Oxford’s Woodhouse Way as ‘woodo’use’. With his knowledge of early English, he knew the name had nothing to with timber houses but was a corruption of woodo wasser – an ancient term for a wild man of the woods. This found its way into ‘The Lord of the Rings’, as the character Ghânburi-Ghân, leader of the forest people.

Tolkien died in 1973 aged 81. He is buried in a simple grave at Oxford’s Wolvercote Cemetery next to his wife Edith. Beside her name is written Lúthien, next to his, Beren. In Tolkien’s mythology, Lúthien was the most beautiful of all the Children of Ilúvatar, and forsook her immortality for the love of mortal warrior Beren. When Beren was slain in battle she persuaded the gods to restore him to life. Magical and moving.

C.S Lewis. A fellow Inkling and close friend of Tolkien, C. S. Lewis was a novelist, poet, and academic – best known for writing ‘The Chronicles of Narnia’. Lewis taught at Magdalen College – his life story was told in the film ‘Shadowlands’. The second in the ‘The Hobbit’ film trilogy, ‘The Desolation of Smaug’, is released in December.

Wordsworth’s celebration of the flowered shores of Lake Ullswater is one of the greatest landscape poems in English literature. Its heartfelt innocent romanticism may seem naïve today, but this was radical stuff in the early 1800s. The idea that nature should be celebrated in poetry and art was a reaction to the industrialisation sweeping across Britain. William Wordsworth’s house, Dove Cottage, in the verdant Lake District setting of Grasmere, is where his passion for nature turned into poetry. 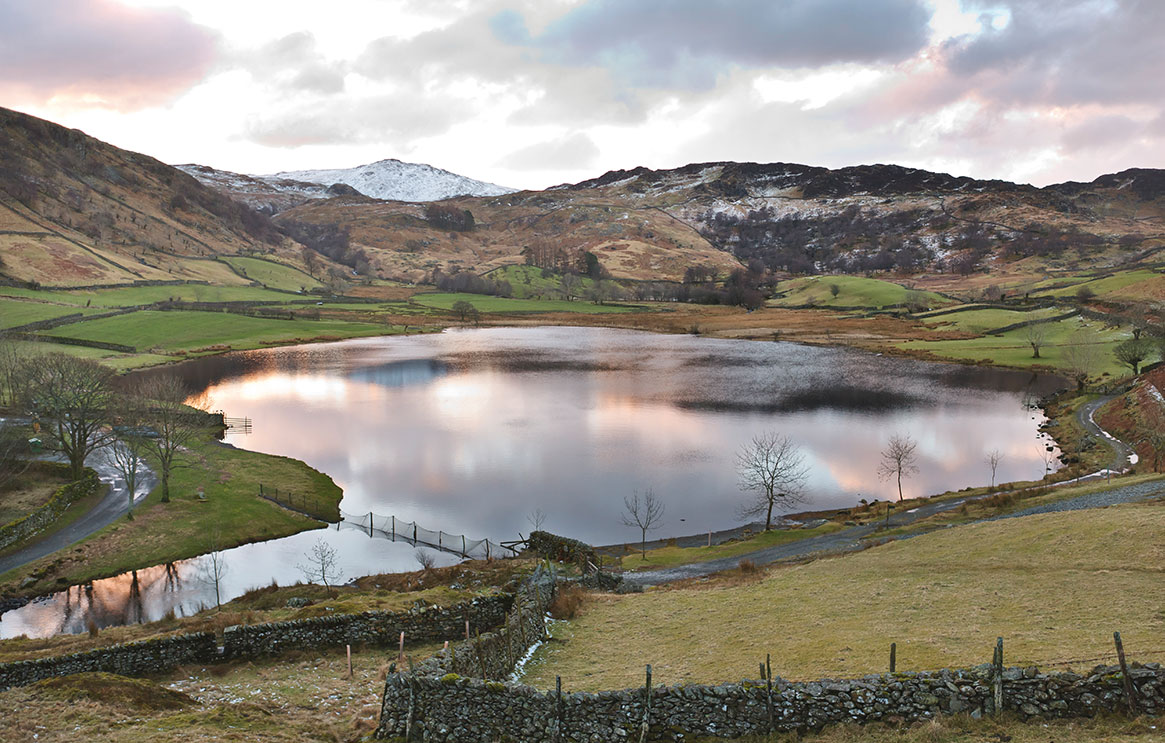 The poet and his sister took up residence here in 1799 and it was his home for the next eight years. Dove Cottage retains its stone floors, dark panelled rooms, coal fires and original furniture. The garden was Wordsworth’s ‘work of our own hands’ – where he planted flowers and vegetables, watched birds and butterflies, read and wrote poetry.

The tragic story of three sisters has turned the parsonage in the small Yorkshire town of Haworth into the second most visited literary shrine in Britain. In 1820 the remote Yorkshire village of Haworth welcomed its new vicar. The Reverend Patrick Bronte took up residence in a bleak stone parsonage overlooking a rising tide of gravestones, softened only by trees.

He brought his six children with him: Maria, Elizabeth, Charlotte, Branwell – the only boy – Emily and Anne. Thirty-five years later all the children were dead, but during the three decades of their brief lives – inspired by the surrounding countryside – they wrote some of the most important novels and poems in the English language.

A year after taking up residence, Patrick’s wife, Mrs Bronte, died. The motherless children formed a tight bond; reading together in their study room, and walking hand in hand across the heathery moors. 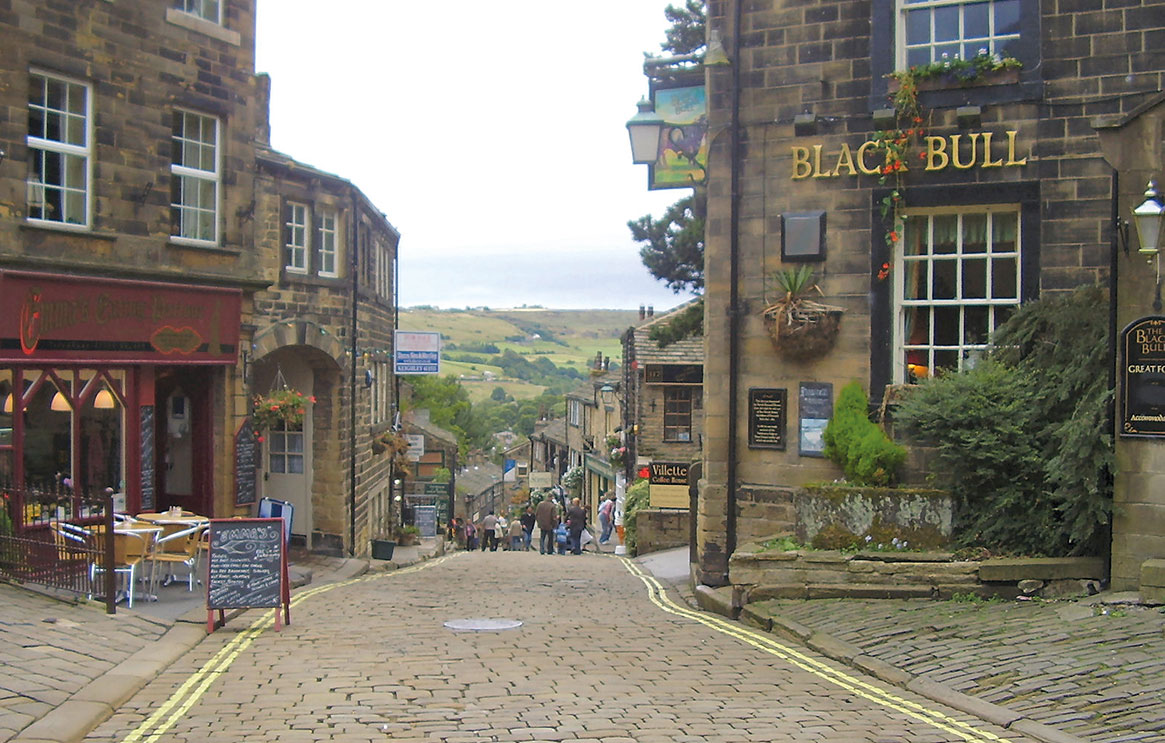 The daughters were sent away to an austere school for the children of the clergy. The harsh environment proved too much for Maria and Elizabeth, who died before reaching their 12th birthdays. The girls returned to the shelter of Haworth, and it was six years before any of them left home again.

In this closed environment, the children’s imagination turned to plays and storytelling. Writing on tiny books made from scraps of paper, they invented their own imaginary characters and countries. The stories were a refuge from the real world which they found so traumatic.

But they couldn’t hide forever. Charlotte took a job as a governess and had a failed love affair with a professor who never replied to her love letters. Branwell, the brilliant young boy who carried the hopes of the family on his shoulders, never fulfilled his destiny of becoming a famous artist and turned to drink and drugs.

The strength of feeling that women should not be published meant that when the three girls finally managed to see their poems in print, it was self-financed, with the pen names Currer, Ellis and Acton Bell.

But the poetry book was a failure. Emily took refuge in the solitude of the moors, roaming the hilltops with her dog. She poured her feelings into a novel, ‘Wuthering Heights’. Anne wrote a book about a poor governess called ‘Agnes Grey’. But it was Charlotte’s book ‘Jane Eyre’, the story of a governess, that was a success. A personal victory that she kept secret from her father.

Drink, laudanum and TB finally caught up with Branwell, who died in 1848. Emily caught a chill at Branwell’s funeral and a three months later she too died – her faithful dog howled at her door for days. Anne soon became ill; Charlotte took her to Scarborough, where she too died – buried there to spare her father another funeral.

Charlotte cut a lonely figure, a young woman who had lost her brother and two sisters in eight months. But in these melancholy years she became famous, writing two more novels, ‘Shirley’ and ‘Vilette’. In 1854, against her father’s wishes, she married a poor church curate. They moved into the in Bronte parsonage. One day she was caught in a rainstorm on the moors, she caught a chill which eventually took her life, aged only 38.

For information on Bronte Country go to: www.visitbradford.com